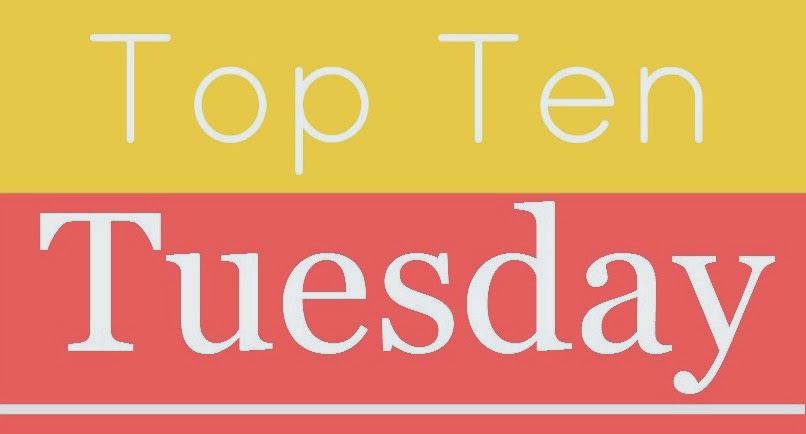 Top Ten Tuesday is a weekly meme hosted by The Broke and the Bookish.

11. Cliche And Unoriginal
Is it too much to ask for books to be different? It's such a disappointment when you practically read the same story three times, with only changing names evidence that no, you're not going crazy, you did pick up another book, it just happens to be very, very unoriginal.
And there's also the cliche. The ridiculous chat up lines, the unrealistic first date, the gorgeous guy picking the shy girl that doesn't mix with the 'cool' crowd. Give me a break, and give me something original.

10. Style Of Writing
This links in with number six, when the author focusses so much on something else (prolific sex scenes) that they compromise the quality and style of writing. So often books can seem amateurish when they try and put as many loves scenes in as possible, move away from the thesaurus to describe his eyes, hair, teeth and whatever else is beautiful and write about something a little bit more meaningful.

9. Not Being Open Or Honest
How many times have I read book where the guy and the gal love each other but think that the feeling isn't mutual. Too many to count. You read one or two and think it's quite cute, then you read a hundred more of the same infuriating thing and it isn't looking so cute anymore.
If you love them, tell them. I don't want to have to read your moaning, whining and doubts. Save it for the sequel.

8. Stop Being Individuals
I love when two characters that are perfect for each other get together. I don't love when they become one person and the entire book is 'oh my gosh he's so fantastic and beautiful and I love him'. No. Just no. Get out, see your friends. Remove yourself from his presence for more than five minutes. Be who you were before you started dating him, not the lovesick fool that has no sense of identity. Put yourself first, cause he's usually a d****e.

7. Extremely Needy Females
Put down the phone, stop texting every two seconds and get off his Facebook page. You can exist without him by your side every second of the day. It's not going to be the end of your life if he has one night with the boys. Stop demanding everything from him and be cool. He doesn't want a lovesick fan, he wants a partner. Man up and be one.

6. Too Many Sex Scenes
If I wanted to read that kind of stuff then I'd buy Fifty Shades Of Grey.
I'm not a prude or anything, it's just that sometimes it really isn't needed yet authors chuck it in anyway. It's even worse when basically every other is full of explicit (and often graphic) detail. I end up skipping huge chunks because there is no end to the sex scenes.

5. Overly Possessive Men
I quite like male characters that are protective and get jealous. Not off the scale stalk his lady to make sure no one's hitting on his woman, just puff out his chest and wrap his arm around her kind of guys. I always remember reading the Twilight series and hating Edward so much (he fell into the former category), especially when he actually REMOVED part of Bella's engine so she couldn't drive to see Jacob! I hated him from that moment on. There's also the guy that gets mad at his girlfriend when she talks to other guys, or even smiles (platonically) at another guy. I don't like that either, if you can check out other woman left right and centre then she can say thank you to a man who lets her on the bus first. Basically, there's a line that really shouldn't be crossed.

4. Forgiving When They Shouldn't
I'm not talking idle little things like forgetting to put the toilet seat down, I mean cheating, hitting and being downright horrible. I've read a few books this past year where something from this list has happened, sometimes the female goes all crazy and dumps them on the spot, and others they make up excuses and forgive the a**hole. And there's always a good guy hanging around in the background, waiting for his chance to show her that he loves her and will be good to her. Yet it always takes them until the end of the book to realise, and we end up with 100 pages of an awful boyfriend.

3.Getting Back Together When They Shouldn't
This follows on from the previous point. So they finally see the light and dump the idiot, and everything's going well. But then they do something stupid. They get back together. Why, oh why? He/she are clearly not right for you, your not happy when you're with them, they cheated, whatever the reason for breaking up with them you need to stay true to yourself and STAY AWAY! Take a tip from TayTay, and never ever get back together.


And I thought I'd add the video for good measure.

2. Putting Up With C**p
Basically when a guy is awful, not just once or twice, but repetitively. And the girls do nothing. They just sit back and accept the way they are spoken to, the pathetic excuses and lies. Why do authors write characters like this? Characters with no backbone that clearly don't respect themselves. This may sound odd but I don't respect characters that put up with c**p, and usually I also don't like them. I'm not talking about guys that are jerks once or twice, I'm talking repeat offenders. Ain't nobody got time for that.

1. INSTA LOVE.
One thing that will put me off a book instantly. It's irritating and unbelievable. Why do authors think it's okay? It's really, really not. There is no way you could meet a guy and after 2 whole minutes of knowing him be certain that he's the one you're going to spend the rest of your life with. It doesn't work like that. What the characters should be thinking is 'he's pretty hot, in fact he's gorgeous he gives Benedict Cumberbatch a run for his money' (let's get real for a moment, a boy who gives Benedict Cumberbatch a run for his money is a very special boy indeed). What they should not be thinking is 'oh wow, I've met my soulmate. This is the man I will grow old with, we'll be together forever and I don't care what anyone else thinks. I wonder what his name is.' THAT IS NOT OKAY!

This has been one of the funnest posts to write! I absolutely adored writing about all the things that really bug me in the romance genre. I loved it so much that I started texting my friend all about it so we could rant all about it together.

If you've also done Top Ten Tuesday this week then let me know in the comments! I'd love to see what you had to say about romance in books!